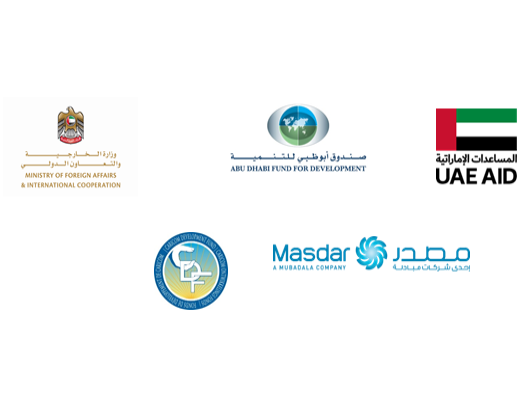 Abu Dhabi, United Arab Emirates; September 19, 2019: The UAE-Caribbean Renewable Energy Fund (UAE-CREF) has announced a partnership with the CARICOM Development Fund (CDF) the Government of Antigua and Barbuda’s Ministry of Public Utilities, Civil Aviation, Transport and Energy, and the New Zealand Ministry of Foreign Affairs and Trade (NZMFAT) to restore power to Barbuda following the near-total destruction of the island after Hurricane Irma struck in September 2017.

The agreement will see the disbursement of $5.7 million from the UAE to support Antigua and Barbuda through the largest renewable energy initiative of its kind in the Caribbean region, wherein the UAE-CREF put forth $3.5 million during the first round of funding in 2017, in addition to $700,000 of humanitarian funding the UAE provided to Antigua and Barbuda after Hurricane Irma in 2017.

The Government of Antigua and Barbuda also put forth $1 million through the CDF, and the Government of New Zealand donated $500,000 to aid in funding the project and building a hybrid solar-diesel power station equipped with hurricane-resilient battery storage. The project will be executed by the UAE-CREF in partnership with the UAE Ministry of Foreign Affairs and International Cooperation (MoFAIC), Abu Dhabi Fund for Development (ADFD), and Abu Dhabi Future Energy Company (Masdar), responsible for project design and implementation.

His Excellency Sultan Al Shamsi, Assistant Minister of Foreign Affairs and International Cooperation for International Development Affairs, expressed his contentment with this project, which will contribute to the prosperity of the people of Barbuda. Furthermore, he stressed that this project comes within the framework of the UAE’s efforts and constant keenness to implement projects that serve communities by offering sustainable solutions and supporting the achievement of Sustainable Development Goals.

“After the devastation caused by Hurricane Irma in Barbuda, we are not only trying to restore electricity to the island—we will work to rebuild it even better. Providing the island with a solar power plant will solve its energy crisis, provide clean, environmentally friendly energy, and improve the living conditions of islanders who will operate and maintain the new solar power plant to help reduce the impact of climate change,” Al Shamsi stated.

Sir Robin Yearwood, Minister of Public Utilities, Civil Aviation, Transport and Energy of Antigua and Barbuda, thanked the UAE, the Government of New Zealand and CDF for their contribution to the transformative energy project, and stated: “This project will be a core component of the efforts by our government to transform Barbuda into possibly the first truly climate-resilient community in our region and doing this within a sustainable energy framework. This will also serve as a model for other Caribbean SIDS [Small Island Developing States].”

The project aims to build a modern, climate-resilient, safe, reliable and sustainable supply of electrical power for Barbuda in the wake of Hurricane Irma, which destroyed 95 percent of the island on September 6, 2017, and forced all 1,800 residents to be evacuated to Antigua.

His Excellency Mohammed Saif Al Suwaidi, Director General of ADFD, said:“As part of the second funding cycle of the UAE-CREF, this energy efficient and multi-faceted project on the island of Barbuda exemplifies the level of collaboration needed to ensure that renewable energy alternatives are spread far and wide to areas or states that can gain maximum benefit. Caribbean island nations are rich in sustainable resources that are used to produce energy. ADFD is delighted to work alongside its distinguished partners to bring clean energy alternatives to the area and support the Government of Antigua and Barbuda in translating its national priorities into tangible realities.”

Mohamed Jameel Al Ramahi, Chief Executive Officer of Masdar, said: “In light of the recent catastrophic damage caused by Hurricane Dorian to the northern Bahamas, the hurricane-resistant solar projects that are being developed by UAE-CREF are vital to the Caribbean region. It is a privilege to support our partners on this extremely important project that will rebuild Barbuda’s electricity system to give the island’s inhabitants access to a reliable and sustainable supply of electrical power. This would not have been possible without the vision and joint efforts of the Government of Antigua and Barbuda, the CARICOM Development Fund, the Government of New Zealand, the UAE Ministry of Foreign Affairs and International Cooperation, and Abu Dhabi Fund for Development.”

The plant will displace an estimated 260,000 litres of diesel fuel per year, saving the Government of Antigua and Barbuda $320,000 and offsetting 690 tonnes of carbon dioxide annually. The project notably supports Barbuda’s green tourism industry.

Rodinald Soomer, Chief Executive Officer of the CDF, added that CDF’s $1 million contribution to this novel power project will be applied towards the solar energy component, in keeping with its 2015-2020 Strategic Plan, which allocates concessional financing towards energy efficiency and renewable energy investments to CARICOM member countries.

“This project is also consistent with the CARICOM Energy Policy, which aims to accelerate the deployment of renewable and clean energy sources to increase diversification and affordability. The CDF’s support for this project also allows it to achieve one of its fundamental aims, as stated in the Revised Treaty of Chaguaramas, which is to address the structural diversification and infrastructural development needs of member states. This includes investing in climate-resilient infrastructure,” he stated.

New Zealand’s Ambassador to the UAE, Matthew Hawkins, said: “The New Zealand Ministry of Foreign Affairs and Trade is pleased to support this initiative in Antigua and Barbuda. Supporting energy security and climate resilient infrastructure is key to sustainability for small island states in the Caribbean and Pacific. This initiative continues our partnership with the UAE Government in delivering renewable energy projects for small island states and the most vulnerable communities in the Caribbean and Pacific.”

About UAE Ministry of Foreign Affairs and International Cooperation (MOFAIC)

MOFAIC is the federal entity responsible for the international relations of the United Arab Emirates, including its development and humanitarian assistance activities. MOFAIC aims to enhance the effectiveness of foreign assistance by ensuring that UAE support is based on humanity, neutrality, impartiality and independence, and that sustainable development is central to foreign assistance.

Abu Dhabi Fund for Development is a national organisation owned by the Abu Dhabi government. Established in 1971, its purpose is to help emerging countries through providing concessionary loans to finance sustainable development projects alongside other long-term investments and direct contributions. In addition, the Fund manages government grants offered by the Abu Dhabi government and monitors the course of the relevant projects. To date, it has invested around AED84 billion in development projects across 88 countries.

Abu Dhabi’s renewable energy company Masdar is advancing the commercialization and deployment of renewable energy, sustainable urban development and clean technologies to address global sustainability challenges. Wholly owned by Mubadala Investment Company, the strategic investment company of the Government of Abu Dhabi, our mandate is to help maintain the UAE’s leadership in the global energy sector, while supporting the diversification of both its economy and energy sources for the benefit of future generations. Masdar’s renewable energy projects are located in the UAE, Jordan, Mauritania, Egypt, Morocco, the UK, Serbia and Spain.

The CARICOM Development Fund (CDF) (www.caricomdevelopmentfund.org) is an institution of the Caribbean Community established by Treaty as a key developmental mechanism in the architecture of the CARICOM Single Market and Economy (CSME). The CDF is committed to achieving its vision to lead in providing effective, efficient and sustainable solutions that address the challenges faced by disadvantaged countries, regions and sectors participating in the CSME.  In so doing its mission is to assist its Member States (namely Antigua & Barbuda, Barbados, Belize, Dominica, Grenada, Guyana, Jamaica, St. Kitts & Nevis, Saint Lucia, St. Vincent and the Grenadines, Suriname and Trinidad and Tobago) maximize the benefits arising from participation in the CSME, by reducing intra-regional disparities through effective partnerships and the provision of financial and technical assistance.

About New Zealand Ministry of Foreign Affairs and Trade