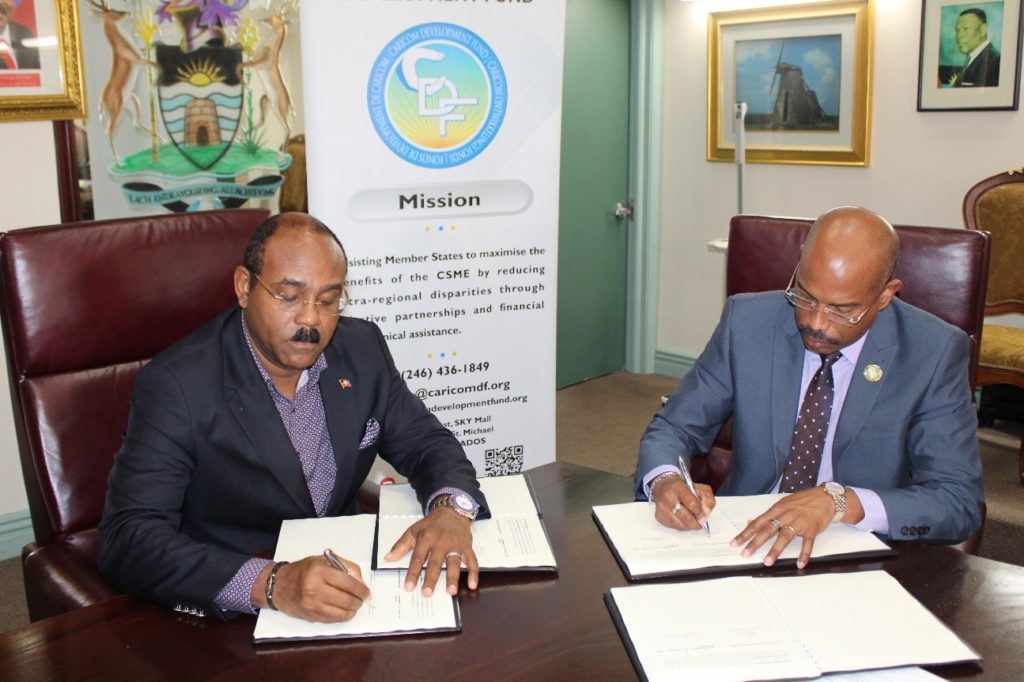 The CARICOM Development Fund (CDF) on February 5th, 2019 signed a US$1Million Grant Agreement with the Government of Antigua and Barbuda to finance the Solar Power component of a project primarily financed by the United Arab Emirates (UAE) to construct a Hybrid Solar/Diesel Base Load Power Station with Battery Storage, on Barbuda. The system will be designed to meet electrical demand on a 24/7 basis, with priority deployment of the Solar Photovoltaic (PV) and battery storage to minimize diesel fuel use. This project will therefore restore a modernized, safe, reliable and sustainable supply of electrical power to Barbuda, following the near-total destruction of the power system from the passage of Hurricane Irma in September 2017. The Design will hold space for further generators, PV and battery storage to be added as Barbuda’s economic recovery continues and electrical load increases.

CDF’s support to this investment is in keeping with Article 158 of the Revised Treaty of Chaguaramas which establishes the Fund’s core mandate to provide financial and technical assistance to CARICOM Member States to enable them to derive optimal benefits from their participation in the CARICOM Single Market and Economy (CSME). In that regard, one of the clearly identified purposes of the CDF, as stated in the Revised Treaty of Chaguaramas, is to address the structural diversification and infrastructural development needs of Member States, which of necessity includes investing in climate resilient infrastructure.

CDF’s involvement in this project is also consistent with its Strategic Plan 2015-20, which provides for an indicative allocation of just over US$9 million towards Energy Efficiency and Renewable Energy investments, as well as the CARICOM Energy Policy which aims to inter alia ‘Accelerate deployment of renewable and clean sources of energy supplies towards increased energy supply diversification and affordability’. The project is also supportive of Antigua and Barbuda’s National Energy Policy, one of the aims of which is to ‘Transform Barbuda into a 100% renewable energy dependent island by 2030’. The other project sponsors are the Government of New Zealand and the Government of Antigua and Barbuda.

This project will be the first element of the Country Assistance Programme (CAP) for Antigua and Barbuda under the CDF’s second funding cycle (2015-2020). Under its first funding cycle, which ended in June 2015, the CDF provided a combination of grants and concessional loans to Antigua and Barbuda to the tune of US$4Million, to complete the Learning Resource Centre at the Antigua State College and to contribute to the Redevelopment of the Lower St. John’s Cruise Ship Terminal.