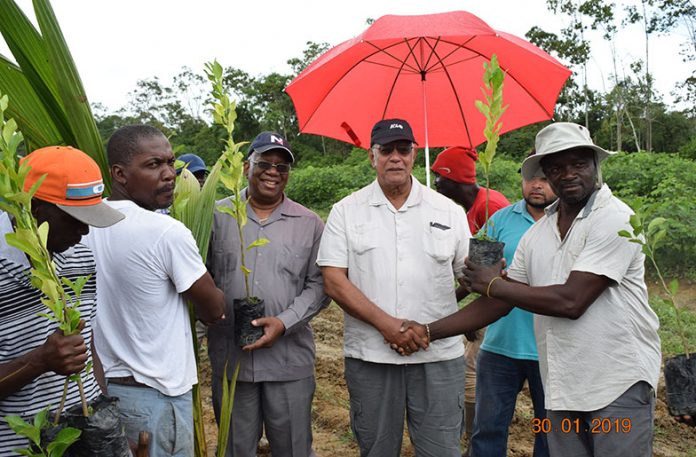 THE Rural Agricultural Infrastructure Development programme (RAID)  aback of Ithaca, West Bank Berbice in Region 5 (Mahaica/Berbice) was off to a running start on Wednesday with the presentation of planting materials to farmers.

A visit to the location was made by the Ministers of Finance  and Agriculture, Winston Jordan and Noel Holder, respectively, to encourage the beneficiaries  to make full productive use of newly developed lands.

The project comprises clearing of 150 acres of land aback  the village, construction of secondary drainage and irrigation canals and control structures, rehabilitation of access dams and the establishment of farmlands and pastures for members of the Ithaca  Agricultural Land Development Coop Society.
The project to open up these unused fertile lands aback of Ithaca for agricultural production was made possible under a loan granted to the Government of Guyana by the CARICOM Development Fund (CDF).
The CDF was established under Article 158 of the Revised Treaty of Chaguaramas “for the purpose of providing financial or technical assistance to disadvantaged countries, regions and sectors.”

Buxton, Triumph and Mocha villages are three small-scale farming communities in Region Four which are benefitting from similar drainage and irrigation systems and agricultural support under the scheme.
During the visit, the Finance Minister disclosed that the loan for the RAID project had been obtained from the CDF  2015-2020 funding cycle by his ministry after Guyana had qualified for  Country Assistance Program (CAP) in the second cycle of the Fund.

He disclosed that the CDF’s first funding cycle went towards a major road programme to improve access to farms and expand agricultural production by bringing new lands under cultivation aback of Parika in Region 3 (West Demerara/Essequibo).

He said: “This project here at Ithaca is close to my heart. I, as Minister of Finance, fought hard for a project like this specifically for those communities which were ignored, fallen into the cracks, lost in translation, or what have you.”

“We approached the CDF and were able to persuade them to fund these projects for neglected communities and so agricultural infrastructure for the backlands of  Ithaca, Buxton, Triumph, and Mocha became possible,” he said.

He said that he believed that cooperatives are still the way to go and his ministry would give the Ithaca Co-op whatever support it could because he, personally, wanted the venture to be a success.

He assured the beneficiaries that government will assist with marketing; all they had to do was make full and productive use of the land and ensure that the project remains viable long after the funds have been disbursed.
Senior officials from the Ministry of Agriculture, various agricultural agencies and other agencies in Region 5 (Mahaica/Berbice),  including the NDIA, the GLDA, NAREI, the MMA/ADA and the Regional Democratic Council of Region 5 were among those present at the event yesterday.
H. NAUTH and Sons General Engineering Contractors had won the $148M contract for constructing drains, canals, access dams and hydraulic structures for the Project.
Additionally, the government through the Ministry of Agriculture had purchased tractors and a bulldozer and excavation equipment which were used in the establishment of the drainage and infrastructure network and the access dams to and from the farm area.

The equipment will be kept by the National Drainage and Irrigation Authority (NDIA) and the farmers will be able to access their use on formal request to the NDIA.

The National Agricultural Research and Extension Institute (NAREI) and the Guyana Livestock Development Authority (GLDA) are also offering technical advice to the beneficiaries on what to grow and what to rear.
Minister Holder, who helped to distribute planting materials to the farmers, disclosed that the other RAID projects at Mocha, Buxton and Triumph were proceeding satisfactorily for imminent use by beneficiaries in these formerly neglected villages.