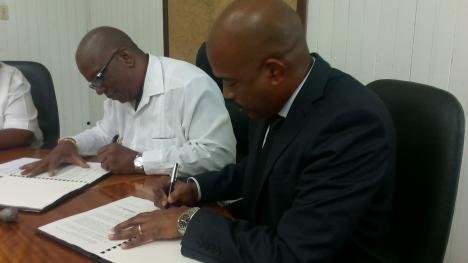 Guyana is likely to be the first member state to benefit from a new country assistance programme (CAP) under the CARICOM Development Fund’s (CDF) 2015-2020 funding cycle, since that country is already eligible to receive further support by virtue of having paid up its full assessed contribution to the organisation. 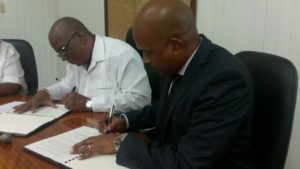 CEO of the CDF, Rodinald Soomer and Guyana’s Minister of Finance, Winston Jordan, as they signed a supplementary loan agreement for Guyana’s CAP in the CDF’s first funding cycle, which went towards a major road programme to improve

CEO Rodinald Soomer disclosed this recently stating: “The CDF is ready and willing to make this possible and wishes to thank the government of Guyana for its demonstration of commitment to, and confidence in, the CDF.

“The CAP allocated in the first cycle, which went towards a major road programme to improve access to farms and expand agricultural production by bringing new lands under cultivation, received a high grade from independent evaluators and was recommended for expansion. The programme was assessed to be well managed, and to have been characterized by a significant level of local ownership and participation.”

He added that a team from the CDF commenced discussions with the national focal point in Guyana during the last monitoring mission, which included preliminary discussions on possible projects for funding in the upcoming cycle. Soomer advised that Guyana is in the process of internal consultations to be in a position to present a formal programme early in the new year for the CDF’s consideration.

“Immediate future assistance to Guyana will be framed within the context of implementation of CDF’s new strategic plan through the execution of which we project to distribute resources to an estimated total value of US$86 million.

He added that under the new cycle there is potential for a larger proportion of grant funding to be made available to eligible Caribbean Community (CARICOM) member states, subject to the signature and ratification of an amendment to the CDF agreement, which has already been put to member states for action.

“There will also be an opportunity to roll out additional programmes for disadvantaged regions and sectors going beyond our current operations, which target country-level disadvantages. All of these possibilities provide new avenues for delivering additional developmental benefit and opportunities to Guyana and other CDF member countries to take advantage of the CSME.

“This is consistent with the mandate of the Fund to provide financial and technical assistance geared at addressing social and economic dislocation arising from implementation of the CSME, so that all member countries can benefit optimally from deeper economic integration of the CARICOM region,” Soomer said.